Are you interested in breeding Hokkaido Ken in the USA? Read this...

BradA1878
October 2014 edited November 2014 in Hokkaido Inu (北海道犬)
Katana and Genko have found a home! Thanks all who showed interest and supported the effort.


If you're interested in breeding Hokkaido Ken in the USA, then I have an situation that could really benefit your effort in the breed...

I imported a very nice female Hokkaido, named Genko, several months ago. She is a nice little dog, and is a fairly tame example of the breed. I also have Katana, a male that was imported by one of our NKF members, but later rehomed to me due to her having to downsize her dog count. Katana and Genko are both intact, and actually make a very nice breeding pair.

Also, several members of the forum made a collective effort to import a male brindle Hokkaido, named Yezo, who was meant to be used in our breeding efforts with Genko. Yezo lived with me for a few months, but then went to live with another member of the forum in Canada due to him not getting along with all my male dogs. He is still intact and can be used to breed with Genko (this was the original intention).

My wife, Jen ( @creativejen ), and I have decided not to move forward with our Hokkaido Ken breeding efforts. We came to this decision for many different reasons, so feel free to ask me if you'd like more detail on that. The primary reason we're not interested in breeding Hokkaido Ken is due to temperament - I worry about finding proper homes for the breed in the US, and given the number of dogs we already have, and my concern over the potential for puppies produced failing their homes, we do not have the space to have "extra" Hokkaido Ken here.

The other side is that they are both hunting dogs, and they need to be hunted or worked regularly at the very least. I have too many hunting dogs to be able to hunt all of them. So I need to make the hard decision to place some so I can focus on the others. Genko is from the most famous (and last) bear hunting kennel in Japan. Her bloodlines are very special from that respect, but, unfortunately, they recently made it illegal to run dogs on bear here in Colorado.

So, my offer is simple, if you are truly dedicated to working with this breed, through the good and the bad, and you want to get in on the ground floor of a very rare breed (arguably the rarest dogs breed in the USA - with less than 10 known to us in America), and you're dedicated to building the Hokkaido Ken community here in the USA, you can take Katana and Genko as a breeding pair to kick start your breeding effort.

All I ask for in return are these things...

1) You will sign a contract saying you will not rehome or sell either Genko or Katana under any circumstances. If they need to be rehomed due to unforeseen life events, they will come back to live with me.

2) You will become a member of, and take over as the head of, the Hokkaido Ken Association of North America, working with the founder, Lindsay ( @lindsayt ), to move the club forward.

3) You will reimburse me with a puppy (or the value of a puppy) from one of Genko's litters.

4) You will maintain an active and transparent presence on this forum with the focus on educating potential Hokkaido Ken owner and enthusiasts.

*I have Genko's and Katana's registration and paperwork from Japan.

So that we're 100% clear, I want to take a moment and share some insight I've learned about the breed, based on the 3 I've raised and the few I've met in Japan...

A few realities about the breed:
1) They're small. Like just a bit larger than a Shiba. These 40# Hokkaido I keep hearing about, I dunno where they are. Ourse are smaller than our Kai Ken.

2) Hokkaido Ken are noisy loud dogs. They bark, they howl, they scream, they chirp, they grunt... They have a lot to say. You need to be prepared for a lot of noise. Not a breed for noise sensitive types.

3) I wouldn't consider the Hokkaido Ken to be "kid friendly". Even Genko, who was raised with my 4 year old daughter (who's been around more dogs than most adults), isn't very good with kids - even Chase (my daughter). I wouldn't recommend the breed go to a home with young kids.

4) They're a sticky breed. They stick close, even in the woods, which is a nice trait that I really like about the breed.

5) They're not a breed that likes to be handled a lot. They will take some love from you here and there, but they are generally antisocial in that respects.

6) They're high energy. Probably the highest energy of all the NK breeds.

7) They're not very good with other dogs. I wouldn't say they're a quarrelsome breed, like the Shikoku Ken, but they're pretty antisocial around other dogs and lack a lot of the "calming signals" most dogs come with. 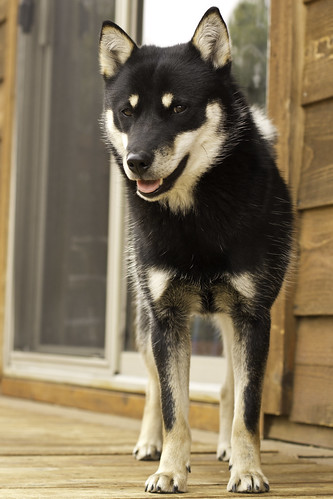 Here's Katana (I'll get a better pic of him this weekend)... 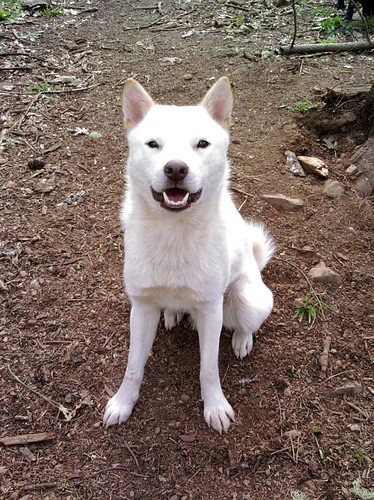 This discussion has been closed.

It looks like you're new here. If you want to get involved, click one of these buttons!